What do we do with a possible case of serial downvoting?

I seem to have picked up a stalker in the past day or so, and (coincidentally) I received 4 downvotes in that same timespan. Now, it may indeed be entirely coincidental, but it sort of smells like a serial downvote. I think they're being spaced a bit so the system doesn't catch them automatically.

Do I let it slide, or should I reach out to a mod?

As I am the person that downvoted I thought that I would justify the reason for it.

My first two times I had seen answers from you I noticed that they were both either based off of someone else's content or the same as someone else's content, which I don't think is good to do. So I had a quick look through and noticed they weren't the only ones like it.
Now for me I am of the opinion that it's fine to do this if you create a much better more expanded answer with a lot more to it, but on some of your answers you just reword it with the same meaning.

I will admit at one point I downvoted one because it was simply wrong, but if you were able to see my upvotes you would see that I have probably given more rep in upvotes to you than down. 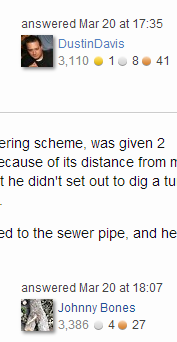 My main point is that I would say if you think you can improve someone else's answer let them know how they can make it better, don't take it and try to get more rep from it. It just leads to duplicate answers and turns to a popularity contest. You can even edit answers if you wish to add to them and the author can decide if they agree with your points.

I am sorry to upset you but I do tend to look at other people's answers and questions and I upvote good ones and downvote bad ones. I don't do it based on the person.

Show that I also upvote your answers: 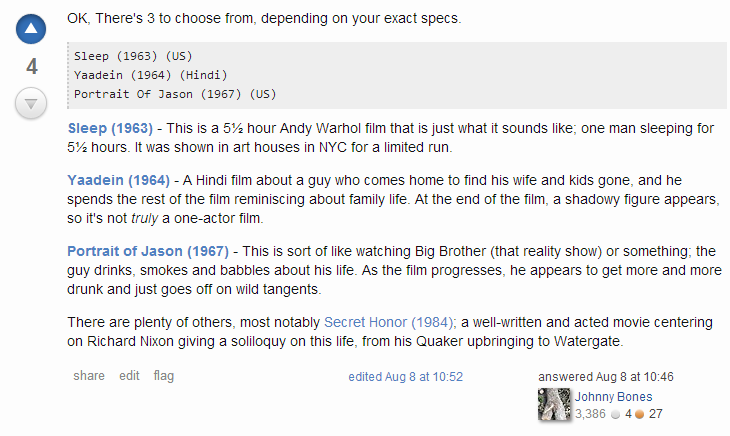 Well, that mentioned user has expressed genuine disapproval of your way of answering before. While he didn't provide any examples or explanations of what in particular he finds wrong with those answers (and without those I personally wouldn't subscribe to his assessment for now), it doesn't seem so much that he downvoted them because he doesn't like you, but because he just doesn't like those answers. And while an explanative comment for downvotes is encouraged, people are free to downvote answers they find bad.

I thus wouldn't call it serial downvoting yet, given that those are only 5 answers at the moment, stretched across 3 time periods, and with 3 of those 5 answers on currently active questions, and only 1 of those with a high number of countering upvotes (and thus objectively seen "pretty strong"). And that user already said himself that he looked at your other answers and found many of them inappropriate (even if not exactly saying in which way).

So while it stands to wait how this situation unfolds, I would not call this out as serial or abusive downvoting for now (be it only to calm down the situation). But I would strongly encourage that user to comment on the individual downvoted answers and explain what particular problems he sees with them in order to help improve the situation (if not done already).

(I don't want to say your complaints are completely ungrounded, but as a general advice in the spirit of mediation: As easy as it might seem to downvote in a personal and abusive way, as easy it is to take honest downvotes personal purely based on previous unfortunate encounters with the respective users.)

Not the answer you're looking for? Browse other questions tagged discussion support .

The Overflow Blog
Featured on Meta

4
What's the deal with the serial upvoting?
12
2015 Moderator Election Q&A - Questionnaire
5
How to properly close recommendation questions?
10
How to handle low quality identification answers?
52
Shall we ban identification questions?
16
Should we encourage swifter deletion of bad ID questions?
9
Improving the design of the top banner
4
Community Ads for 2021