Is the Great British Bakeoff question off topic?

I recently asked a question about the filming of the Great British Bakeoff. Given the recent controversy I asked when it was filmed and whether the viewers criticism could imparct contestant disqualification.

It's been put as Off Topic but it seems to be quite controversial. Let's discuss:

I applaud you for bringing this to Meta, but it seems like an open and shut case to me.

Whilst I don't understand the suggestion that this should be off topic as it is Trivia, I do understand how the phrasing of the question may put people off who lack the context to understand what this question is drawing attention to/discussing. Liath has already asked a question on the Great British Bake off that wasn't dismissed as Trivia, this one is absolutely no different. It's inconsistent at best, and sheep behavior at worst.

As we've discussed before on Meta, there is a mounting concern on M&Tv that people are downvoting/close-voting because they, as individuals, are unfamiliar with the source material the question is discussing. This is another regrettable occurance, but we have to realize that when we're working with a diverse transnational user-base, sometimes we need to draw attention to the significance of the events being discussed, which I think perhaps a revision to your question could remedy.

That isn't to say there is anything distinctly wrong with the question, just that it could perhaps educate those who are unaware of the Bake-off scandal a little more: but the problem here is an attitudunal one amongst close voters, so don't be put off.

As I've said before, I think we should endeavour to keep mindful of an attitude of 'Improve/Don't-Remove', but that of course also extends to you Liath in that you must be open to suggestions of improvement, and pursue them yourself to keep the question open.

Unfortunately, in this instance, no one has offered any suggestions, which is regrettable but increasingly typical. I'd also ask that before close voting, people should consider whether their only disagreement with a question could be born out of simply not knowing enough about the topic proposed, and consider whether that is an appropriate reason to downvote/close-vote before doing so.

To give some context to Liath's question for those of you unconvinced of its propriety, you'll see why this question is not only relevant but interesting, and one that provides a topical discussion that will attract users:

The Great British Bake-Off is a hugely successful baking pageantry program in the UK, and is currently at the center of a prominent 'Scandal', which has produced a lot of activity in the press due not only to it's details, but to irregularities amongst the shows perceived production.

The Scandal itself is relatively mundane: Diana Beard, an elderly woman has taken another contestants 'Baked Alaska' dessert out of the Freezer (almost certainly accidentally) which has resulted in its disintegration. The dish's chef, contestant Iain Watters took the news with understandable frustration, and after depositing the ruined cake in a bin served the bin itself up as his entry. 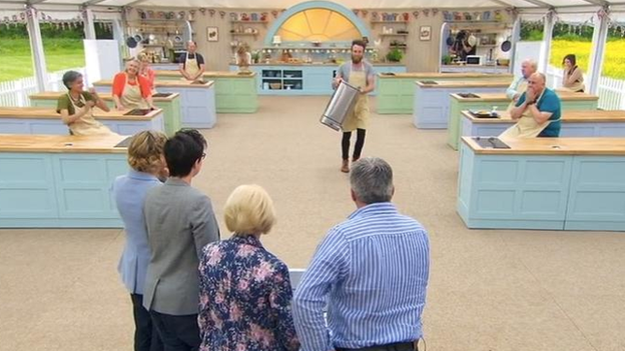 He was dismissed from the show, and the nation reacted with indignant scorn as the 'perpetrator' remained unpunished.

Despite the long held belief that there is a broadcast gap between the shows filming and broadcast, a number of people have begun to campaign to try and bring Iain back into the Show, and are experiencing confusing success given the previously assumed production of the show. This could be attributed to participatory humour, if the Shows previous winner hadn't contributed... 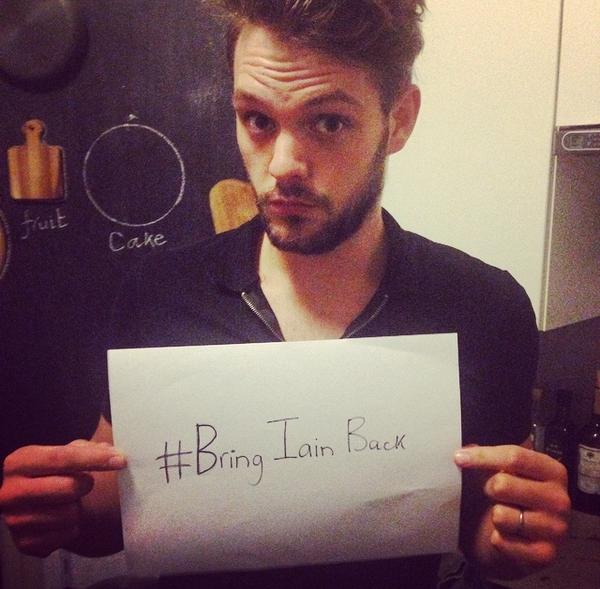 After the episode aired, the BBC announced that Diana, 'the perpetrator' had left due to 'health issues', which many people are speculating is in response to her actions and their reception: but if this was all filmed a long time ago, how would a public response be a factor?

Further to this, the BBC have now announced that, in light of the public response to the broadcasting of the show, they have made plans for both contestants to return to the show. Again, how is this possible?

If, as previously assumed, the show is recorded to completion before it is ever broadcast, how could these changes be made.

Now this is where the confusion comes in, that Liath's question nobly attempts to clear up: How far ahead is The Great British Bakeoff filmed?

No where in the media has anyone come up with a reliable and acceptable account of how the show is produced, and how it is possible that the show has been altered in response to the public outcry? There are conflicting reports out there that speculate on the Shows' secretive production schedule, Liath is asking for them to be cleared up.

Liath has come to this Userbase so it may serve exactly its function: to seek out independent experts with insight into the 'behind the scenes' style production of these shows, to provide an answer to the confusing turn of events in the UK media at the minute.

I'd point out, finally, that it's not neccesarily Liaths responsibility to present the entire context of his question in the body of his work, as it can definitely be superflous and condescending to anyone who understands the question immediately; which is to say, it's intended audience.

If you lack the context to understand this question that's absolutely fine: but you could consider, if there is any 'fault' to be found, whether it is within the question itself or your unfamiliarity with its subject matter. The latter, I feel, is not an acceptable reason to close-vote. The onus is on you, as someone who has come to the question to undertake any research or orientation required before taking action.

I'd also point out that I've never watched the show, nor do I have much interest in it, but I am still thoroughly versed with the context of this scandal, such is its current notoriety.

16
Should movie trivia questions be closed?
4
Are we closing too soon?

8
Please elaborate or clear up the FAQ with regards to what is considered off-topic?
3
Are evolution/existence of genre questions on-topic?
5
What identify-this questions should be kept/deleted? [**VOTING CLOSED**]
5
Do we have consensus on what makes a song-ID question on or off topic?
6
Questions on soundtrack
10
What exactly counts as a recommendation question here?
2
Would this question be about the books, and therefore off-topic?
8
Are questions about film theory on topic?