What can we do with generic "NAME THIS MOVIE" question titles?

This site is beginning to be plagued with questions that have useless titles such as:

These are terrible titles as they offer no way to distinguish between them. They also offer no clue as to what might be in the actual question to see if it's even something I could answer if I wanted to.

I've been trying to update these as I see them to make them a bit more descriptive, but that seems like a losing battle.

Alternatively, I've been downvoting and leaving a comment "please provide a more descriptive title" but I'm not sure if that's working either.

Have we as a group figured out a way to handle this yet? Suggestions?

One thought I had would be to perhaps try and enforce a format for these question titles. Maybe something like:

Why not just pick some salient points from the question and recast the title? The powers-that-be gave you an edit button precisely so you could make edits. In the time it takes to write a comment asking the OP to write a better title, you could have written a better title for them.

"Help! What is that movie from the 2000's!" can easily become "Comedy Movie where clique-girl character is upset about being called Megan"

I suggested updating the help center advice in my question, Instructions for Identify-This-X questions should include title advice a year ago. The help center was updated, but I don't think it helped.

The best thing to do is to edit as many as you can. Perhaps take a small vow not to answer the ones with bad titles until you or someone else has edited?

Skeptics.SE uses a blacklist for question titles. They've banned the words really and actually from their titles. The question cannot be submitted as long as the blacklisted words appear in the title.

Perhaps we can do the same, but for different words or phrases (banning help me from titles seems like a step in the right direction). The blacklist mechanism allows for an explanation to be shown to the hapless user.

I suggest to update the page where the person posts his/her question to automatically detect if the title is too generic and poor quality, and provide examples or suggestions so that the question could never be asked with a poor title. 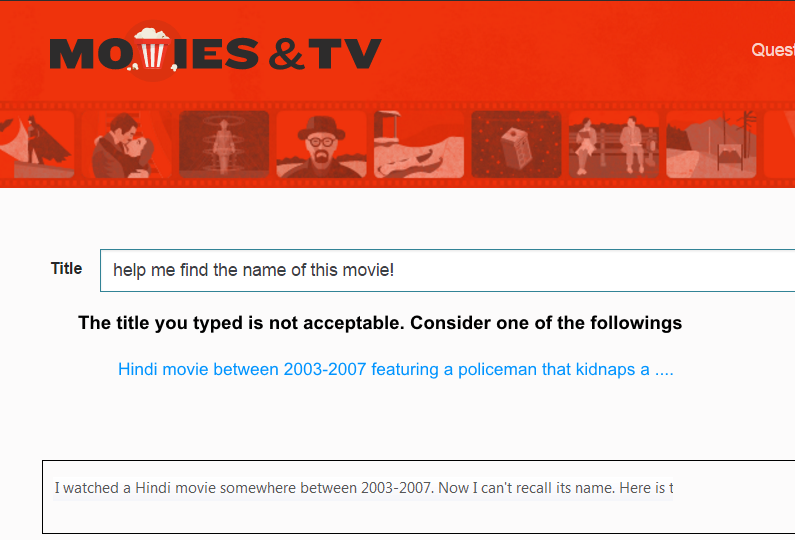 StackOverflow questions, no matter how simple or "dumb" or "badly worded", can be immeasurably helpful and useful because they show-up in Google searches and general site searches, even with just a few overlapping keywords, not to mention the benefits of having a plethora of "related question" links off to the righthand side of the page.

If I wanna know how to automatically make timestamps appear with 3 letter weekday names in Python, that's not really a question that any tutorial or book or general Python website would explicitly cover. But it's exactly the kind of question that you find on StackOverflow; often multiple times.

Sometimes the accepted answer is a link to the documentation, or sometimes there's an answer with a bunch of examples and even some other libraries/packages that you never would have learned about otherwise. That's the huge benefit: discovery.

Sure, having all questions be "Help! What's this movie's name?!" is difficult to track and overly generic. It's a bad title. But it's not necessarily a bad question; so why downvote it?

It seems like it'd be relatively easy to see the question, open it, rename the title to "Identify this: ________ [?]" and fill in the blank with a few keywords from the first line of the user's question. Make a comment that you modified the title. Then, go into the question and help the user out by appending their question with a quick block of markdown:

And then add another comment saying something like "I added a quick summary section for you, please fill it out if you can think of anything more, so people can help answer the question.".

That way people will be encouraged to participate if the "hard part" is already done for them -- and sticklers will get the satisfaction that the site is more coherent and cohesive.

And lastly, I think people should be careful about "correcting" other people's writing. If someone doesn't write syntactically or grammatically "King's English", it could come-off as very discouraging when they return to their question and notice that it's rewritten for them.

If something is unintelligible, then it seems like it would be more appropriate and supportive/encouraging to make a comment like "Can you try and explain more? I didn't really understand when you said '_____' ...? No worries about the grammar, just any more details you can provide would help!". Especially if you want someone to clarify what they've already said; if they get approached with this "policing" of their language, why would they try and say more? Have you ever had anyone interrupt you while you're speaking and "correct" your syntax or grammar? It becomes very frustrating, and you can get the sense that if everything you're saying is coming out "wrong", then why say anything at all? It's disheartening, and I don't think that's the "vibe" the site would want to espouse.

Sure, go ahead and "police" for duplicates or things that are racist, sexist, or "off-topic" -- but what's that whole den of snakes when you're in a site just called "Movies & TV"??? -- just like StackOverflow, but I think it's important to remember that the benefit should be to provide a way to find questions, ask questions, and answer questions. Doing things that would actively discourage any of that, doesn't really seem fruitful. No matter how syntactically "clean and tidy" the question queue becomes.

Where else can you search for questions like "this movie or show where like there's a creaky noise and maybe a swingset or a swamp and a craggly demon mask guy is in a movie theatre???" and get someone who just so happens to stumble across that rambling stream-of-consciousness and go "Oh! That's definitely Donnie Darko." and give you a screenshot of exactly what you're trying to remember!? A site that provides that; that's magic.

And that's probably why we'd wanna be here and contribute and participate.

27
Identify This Movie Questions?
6
What is the name of this site?
6
What is the best way to answer [identify-this-movie] questions?
5
Instructions for Identify-This-X questions should include title advice
5
Do you think it's time for a change in the way we use tags?
10
What to do with the [marvel-cinematic-universe]?
11
Are we too strict with "identify this movie by a single scene" questions?
15
Improve and extend the automatic tag-popup for identification questions
53
Shall we ban identification questions?