Should we close questions that can be easily solved by reading the subject's Wikipedia page?

I just saw this question and quite frankly I want to close it, because it can be answered by simply visiting the movie's Wikipedia page. But there isn't a close reason for "lack of research", unfortunately.

Sure, I can downvote it. But chances are some others will upvote it (people even upvote blatantly off-topic questions), and thus this low-quality question will live on. (Right now it already has two upvotes and one person has "starred" the question.)

Back in 2011 it seems there was a process to close such questions, and if I google "hitchcock suspicion original ending" the first link is the Wikipedia entry and the excerpt hints at the answer:

Suspicion (1941) is a romantic psychological thriller directed by Alfred Hitchcock, and starring .... Hitchcock's recollection of this original ending—in his book-length interview with François Truffaut, published in English as Hitchcock/Truffaut in ...

And this isn't the only question like that, I've seen plenty recently.

Lack of research really isn't a close reason... it's a downvote reason.

When you hover over the downvote button, you'll see that the text reads:

This question does not show any research effort; it is unclear or not useful.

All three of those are reasons to downvote.

By contrast, none of our close reasons are "does not show research".

Some sites do have a "does not show research" close reason as one of their custom off-topic reasons but I don't think it's really necessary here.

Yes, we're not going to answer trivial questions like "who starred in ___" because that's something that Wikipedia or IMDb can answer but, as in that post from 2011, if the answer is interesting... which I think the answer to that Suspicion question would count as "interesting"... the guidance is to "answer the question". 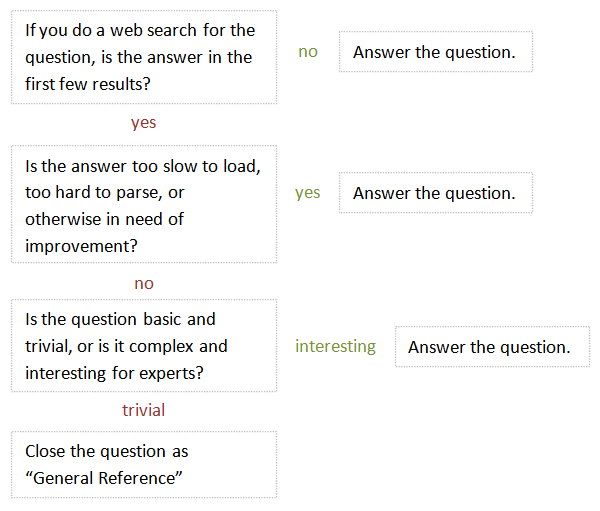 If you don't think it's interesting, let someone else answer.

Not the answer you're looking for? Browse other questions tagged discussion .

4
What is our policy regarding questions with close to zero research?
7
Should we outrule questions without research effort?
2
Should lack of research encompass outside sources?
-3
How to handle low quality "plot-explanation" questions

5
Should we ask for a 'general reference' close reason?
8
Please elaborate or clear up the FAQ with regards to what is considered off-topic?
10
Should we close older Identify questions?
3
Closing questions that can be easily researched
7
Why close easy questions?
5
How to properly close recommendation questions?
14
How do we handle interactive films?
5
How should M&TV's "Ask Question" page be customised?