Is your question about tv or TV? 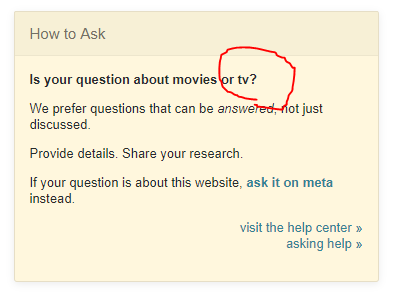 It's the "How to Ask" panel on the right side of the "Ask Question" page. I suppose "tv" should have been capitalized.

On a related note, it says on the All Sites page that Movies & TV is

Q&A for movie and tv enthusiasts

Is this site about tv or TV?

I'm quite sure all these various places you list source their text from one and the same generic site description sentence (as also used for e.g. migration notices). However, this can only be changed by SE employees.

But this little capitalization issue has indeed been a thorn in my eye for quite a while, too. I agree it should either be properly capitalized as "TV", which we largely try to do in many other places in the site's official and semi-official documentation. I admittedly just never deemed it worth bugging the SE employees about it and making an official request, complete with meta backing and everything, about it. However, I'm thankfull you do, so maybe we can get this rolling. It should be a rather innocuous change in a select few places in the database.

But while we're at it, maybe let's use this chance to come up with a better phrase altogether (though, there'd be nothing wrong with just captitalizing the TV and being done with it either).

An alternative idea might be to write it out as "television" (as e.g. the Tour does) to provide a little more "detail" over the sitename that already uses the abbreviation. But on the other hand "TV" might be more ingrained in people's understanding than the full word and easier to associate with "extended TV content" like streaming services. Afterall, the term "television" is a bit of an outdated and inaccurate term to describe everything we're actually doing.

I'm not saying this anachronism goes away when using "TV" instead (afterall that's our site's name and this likely won't change in the near future), but it might come with less of an association to classic broadcast television (and the technology thereof) rather than "TV-shows", which is what it really stands for in the context of our site. So maybe we want to consider using "TV-shows" right away, since this site is about the content seen on TV, one part of which already is "movies", the other part of which is "TV-shows" and the rest of which is...largely off-topic anyway.

The sidebar on the Ask Question page should have the correct capitalization now. I've also updated the audience description and you can verify it in the site switcher. The list of sites on stackexchange.com will catch up in a few days.

Apologies for the long delay and thanks for the report!

0
Should 'TV' in 'Q&A for movie and tv enthusiasts' be capitalized?
5
How should M&TV's "Ask Question" page be customised?

20
Should we merge with TV?
2
Improving off-topic descriptions - particularly 'distribution'
6
Automatically remind users for the age, country and language of a film
4
Icon on stackexchange.com site stats is not yet updated
6
Mismatching design of "we are offline" page
4
Star Wars Episode IV - A New Hope
6
Let's make the ID-close reason text & explanation more useful
9
Inappropriate HNQ ad image
48
Can/should tv.stackexchange.com redirect to this site?
11
I can Rickroll Stack Exchange, and so can you!