Why is my answer on this question deleted?

How does this guy eat? 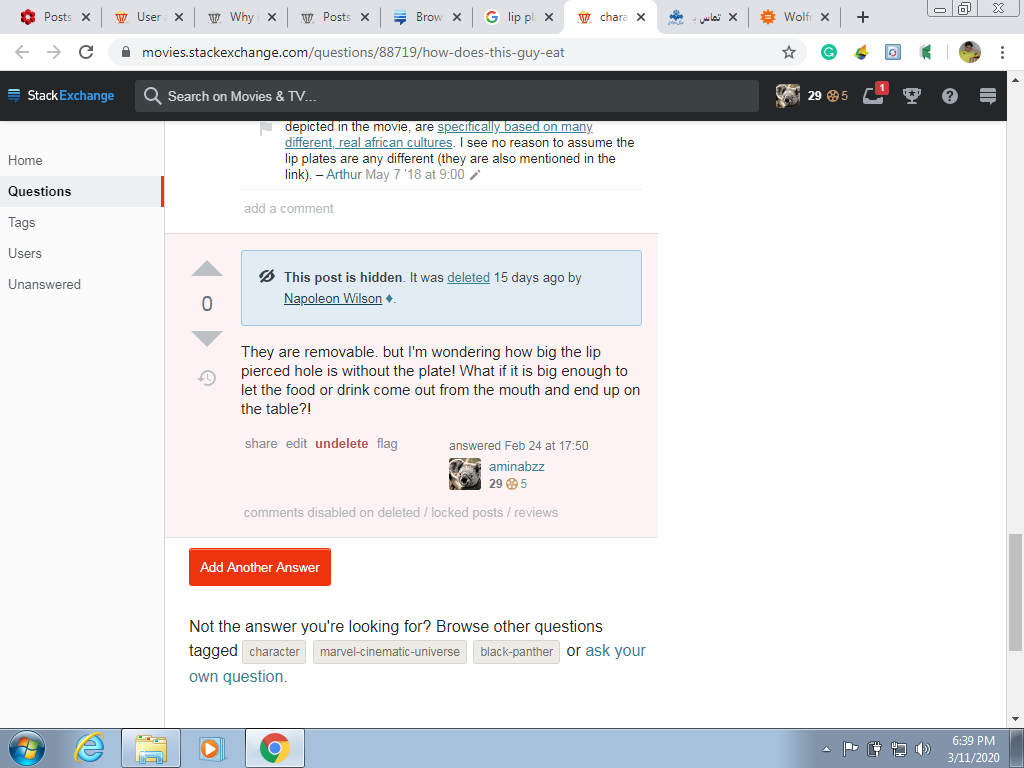 Napoleon, also closed one of my questions for being "lack of details"! but it was deleted because it was duplicated. Is it a good reason to close a question because of being duplicated? there are many duplicated questions here. why are they still active then?!

and this answer. I don't see any bad things about it. I think some users have personal hostility toward me.

I'm seeing three separate but closely-related issues here: you think your answer was deleted unfairly, you think your question was closed unfairly, and you believe that the moderator responsible for both actions has a personal vendetta against you. I'm going to try and address all three.

Let's start with your deleted answer. I can separate it into two halves:

Okay, fair enough, that's an attempt to answer the question. But Paulie_D's answer from two years ago already mentioned that, in big bold letters, and provided a video demonstration. Answers should provide something new, especially if they're coming so late after the question was posted, and simply repeating something that's already in an existing answer doesn't do that.

but I'm wondering how big the lip pierced hole is without the plate! What if it is big enough to let the food or drink come out from the mouth and end up on the table?!

This is not an attempt to answer the question. It's a pair of follow-up questions. That's not what answers are for. FWIW, Paulie_D's answer also appears to address both of those questions: the first is answered by the video I mentioned earlier, and the second is addressed in the paragraph after it:

Naturally, the stretched lip would make eating (and drinking) somewhat messy (one would imagine)...

So the first half of your answer is "very low quality", as it doesn't provide any new information, and the second half is "not an answer" because it's an attempt at asking further questions instead of answering the one that was asked. Both are valid reasons for deletion, so unfortunately I have to side with Napoleon on this one.

Now, onto your closed question:

Is it a good reason to close a question because of being duplicated?

Yes, it is a good reason. The user who posted the duplicate gets the answer they were looking for, the answer itself doesn't end up getting split between multiple posts, and anyone else who has the same question in the future has one extra signpost to point them in the right direction. Everybody wins! Sure, it sucks having your question closed, but it doesn't count against you in any way.

I will note that deleting questions if they're closed as duplicates is a bad move, because a) deleted questions count towards the automated question ban, and closed questions don't (unless they're downvoted), and b) you're depriving future visitors of that extra signpost I mentioned earlier.

As for your "vendetta" accusation... obviously, I can't really disprove that. I don't know what other users here are thinking. In my experience, though, it's highly unlikely. If you see the same user moderating multiple posts of yours - whether it's Napoleon, myself, or anyone else - the most likely explanation is that they're very active and just so happened to bump into those posts in the course of their usual activity.

Speaking for Napoleon, he's been the most active mod here for as long as I can remember, and I have personally seen him close off-topic questions within five minutes of them being posted. He didn't have any vendetta against those people. He just happened to be there when they posted, realised it was off-topic, and acted accordingly.

I'm sure when he next logs in, he'll see this and explain his actions for himself, but I personally don't believe he (or anyone else who may have moderated your posts here) has done anything wrong. You would have to provide more evidence than you have in order to convince me otherwise.

Not the answer you're looking for? Browse other questions tagged support closed-questions deleted-questions .

4
Duplicate closed question should be reversed for this case
9
1111 days in beta: Where do we stand?
5
What happened with this question that was migrated to meta... why was it closed rather than duped?
16
Should we encourage swifter deletion of bad ID questions?
9
How can I make my subjective question more constructive?
3
I need help understanding why my "identify-this-movie" tagged question was marked "off-topic"
7
Should we be deleting ID questions with positively upvoted answers?
8
Identification Question Cleanup: Closing existing questions