Should we ask for a 'general reference' close reason?

Looking at this question, What is a "performance capture" animation movie?, I tried to vote to close it, but none of the reasons fit well. I would have liked to vote to close it due to being a general reference kinda question. Have a look at this blog post for background.

This is my opinion and not any statement of official policy.

The General Reference close reason has been implemented on a limited number of sites on an experimental basis. But I'm starting to feel that the adverse community effects are worse than the problem it was designed to solve.

When someone asks "Who was the author of [X]?", it should certainly be closed as uninteresting to answer (i.e. general reference). So what they are presented with is this:

general reference
This question is too basic; it can be definitively and permanently answered by a single link to a standard internet reference source designed specifically to find that type of information.

…but the impression it sends to everyone watching is "Your question is already in Google. Go find it yourself."

In communities where the issue of "General Reference" has come up, they inevitably start enumerating which Internet resources will become purveyors of the verboten material… rather than focusing on which questions will be interesting to the site. It all becomes very dismissive and new-user unfriendly.

I think it's better to explain in your faq if particular type of question is not appropriate for the site (even if it's just to say "no general reference"), and then simply close them as off-topic with a reference to the faq explaining why.

The "General Reference" close reason was my response to users who ask lazy questions without any effort, research, or context put into it. It satisfied that feeling you get when you just want to hit someone upside the head and say "Why don't you just go flippin' look the thing up yourself!" But in sober retrospect, I think it's better for community building if you educate users what it is to ask interesting questions rather than just slapping a 'dummy' sticker on it.

On French Language & Usage, we use the “too localized” close reason for questions that can be answered by a dictionary entry or Wikipedia link. If you get as good an answer by browsing http://fr.wiktionary.org/wiki/foo as https://french.stackexchange.com/q/42, then the question isn't helping anyone but the asker (and him only just barely).

The problem with a general reference close reason is that it can be abused. I've often seen people who want it to close questions they consider too easy, but what's easy to you may not be easy to the asker. The general reference close reason has unfortunately come to being associated with Borror0's diagram, which Jeff liked, but ignores some important issues. A question is only too simple for the site if it meets several criteria: the answer must be found in an obvious place (not some random Google hit), which must have some aura of reliability, and that place must have not just an entry in a database but something that does answer the question comprehensibly.

In a nutshell, a question about X should be closed if the best way to answer it is to reproduce the Wikipedia article about X.

Edit: I'm retouching on this because I think it is an important reason to have due to some easily answered questions in addition to Trivia questions.

I think we need it

Due to the nature of some of the questions on this site potentially being trivia (which is forbidden in the FAQ), some appear very easy to answer with a simple Google search.

While, in their own right, they are good questions, but a general rule is if your answer appears in the first few hits of Google, then it is generally a bad question.

Now, closing these questions is easy enough, but the reasons we currently have are not, as they portray the wrong message to the user.

Having a General Reference close reason, similar to what is on Lit.SE would be perfect for this site as well. To let that user know that it may be a good question, it is inherently too easy and shows lack of research which is the whole point of the site. 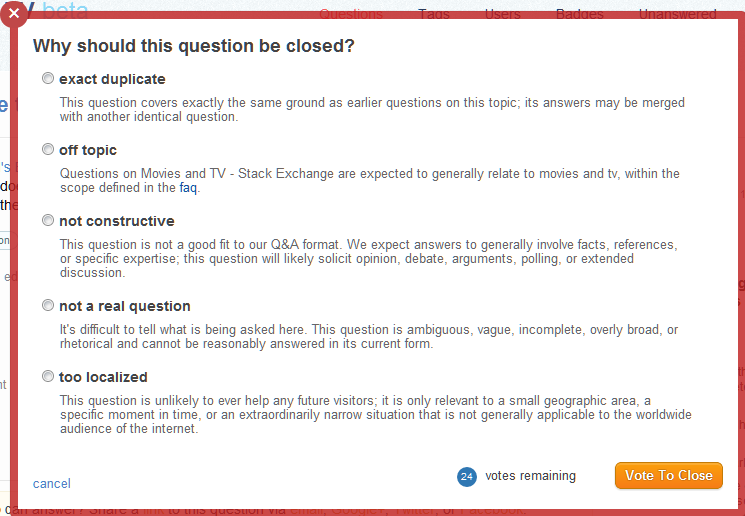 Off-Topic - This is the closest one to General Reference, but doesn't portray the message of "Too easy" more like "GTFO, wrong topic!"

Not Contructive - While the name works for the message, the description doesn't, implying the user meant to discuss instead of get an answer for.

NARQ - Doesn't work in this context because it is a question, just not one allowed.

Too Localized - Doesn't apply to me as this is definitely a question that is useful for the future, but just not a right fit for the site.

Not the answer you're looking for? Browse other questions tagged discussion feature-request close-reasons .

7
Should we outrule questions without research effort?
-3
How to handle low quality "plot-explanation" questions